Georgetown-December 29, 2016: To support the CIDA/OLADE/University of Calgary–Haskayne School of Business’s Rural Electrification Project in Guyana, the Guyana Energy Agency (GEA) installed a 160 Watts solar water pump at the newly constructed Cassava Processing Plant and Farine Factory in the village of Wowetta located in Region 9.

The pump will be used to charge 4 X 1700 litres water tanks that will supply the factory, which is the brain child of the Wowetta Women’s Agro-Processors Group, with water. Though the pump is capable of pumping water to a height of 40 meters at a rate of 1200 litres per day, owing to the fact that there is just 16 meters of height requirement at Wowetta, the pump will be able to pump 4500 litres per day. According to Energy Engineer, Mr. Leon DeSouza who spearheaded the project, “the slow rate is preferred since it gives the well time to re-charge and the water time to settle.” 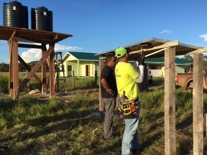 Ms. Priscilla Torres, President of the Wowetta Women’s Agro-Processors Group, said that “…the pump is critical to the operation of the plant as a steady supply of clean water is absolutely necessary for its overall success.” Ms. Torres went on to explain that water is one of the key natural resources needed as it will be used for the washing of cassava and cleaning of equipment. “A solar water pump will ensure that there is a constant flow of water given that Wowetta does not have electricity”, she concluded. Hence, she said that she was “…grateful to GEA for their assistance in the installation of the pump”. She also indicated that there will be a generator on standby for use in the event of continuous rainfall.

The ‘Wowetta Agro Group Processing Plant’ is scheduled to commence operation in January of 2017. It will provide employment for an average of twenty one persons (mostly women) in the community while 12 local farmers have been identified and trained to supply the plant with cassava.

The Rural Electrification Project was implemented in 2009 with funding from CIDA in the sum of US$101,500 with support from the Latin American Energy Organization (OLADE) and the University of Calgary/Haskayne School of Business. The Guyana Energy Agency was the facilitator and was tasked with the responsibility of ensuring that all aspects of the project were successfully completed.

The objectives of the project were to:

In addition to the solar water pump, under the project, the village of Wowetta was also the recipient of:

The project’s aim was to promote productive works within the village and to encourage villagers to become business-oriented using sustainable mechanisms. Members have to contribute to a revolving fund which will be used in the future for maintenance of the systems, replacements or new installations. Each component has a payback period in order to ensure that there are sufficient funds available for sustainability of the project.

The Guyana Energy Agency will continue to support such initiatives and lend assistance to communities in the fulfillment of its vision to supply reliable energy in an economically, environmentally and socially sustainable frame work; under the overarching goal of attaining the realization of a ‘Green Guyana’.

When selecting an air conditioning unit, keep in mind the size of your room. A properly-sized air conditioner will operate more efficiently and dehumidify more effectively.