The Guyana Energy Agency (GEA), in keeping with the main thrust of CEW- to build awareness among various segments of the society across the Community about critical energy issues with a key focus on sustainable energy development at the national level- planned and successfully executed a week of activities to commemorate CEW2014.

GEA kick started their energy week activities ‘at home’ with an in-house quiz on Friday November 14th, 2014 at the Cara Lodge. Two Presentations were delivered to staff members titled ‘Sustainable Energy’ and ‘Energy Conservation and Efficiency Tips’, followed by the viewing of a Documentary on Sustainable Energy.

Things got really exciting during the quiz segment as employees vied for one of the coveted prizes by answering questions which were based on the presentations made and the content of the Documentary. In the end, the Accounts Division was the overall winner carting off five of the ten prizes that were up for grabs.

The aim of the activity was mainly to involve employees in the Energy Week celebrations as well as disseminate energy related information.

The in house quiz paved the way for a school presentation on Monday November 17, 2014. Held in Bartica Region 7, the fourth and fifth formers of ‘Three Mile Secondary School’ were the recipients of the presentation. Delivered in the form of viewing a ten minute Documentary followed by a power point on Sustainable Energy Initiatives, students were engaged in discussions on energy and energy related issues while being encouraged to practice energy efficiency and conservation. Key definitions were highlighted for example ‘Sustainable Energy’, ‘Energy Conservation’ and ‘Energy Efficiency’ among others.

After the delivery of the presentation, students were encouraged to answer questions and tokens (CFLS and T-Shirts) were distributed to those who answered correctly.

School Presentations are an ongoing component of GEA’s strategic plan and is aimed towards providing students with a practical understanding of energy and energy related issues, encourage interest, and behavioral changes, in relation to energy efficiency and conservation.

During Energy Week the Agency seeks to have outlying schools be recipients of the presentation. Hence, Three Mile Secondary was chosen.

On the heels of the preceding, the Burrowes School of Arts came alive with much excitement on Tuesday November 17th, 2014, as fifty six (56) Primary School students of grades 4-6 expressed their energy during the Poster Board Activity.

Aptly titled ‘Express your Energy’, this activity had in attendance fifty six (56) students between the ages of nine to eleven (9-11) whose enthusiasm could not be contained. Representing St. Margaret’s Primary, Marian Academy, St. Angela’s Primary and Winfer Gardens, the students were encouraged to convey their interpretation of energy efficiency and sustainability through artwork and pictorial illustrations. Ardently encouraged by their fellow team members, students expressed their interpretation of ‘The Power of Sustainable Energy’, ‘Think Act Save’, ‘Protect the Environment’ and ‘How to be an Energy Champion’.

The activity was non-competitive; therefore, students were not judged or ranked based on their illustrations. Rather, each school was awarded a ‘Certificate of Participation’ while each student (and teacher) was awarded a token of appreciation as an honorary ‘Energy Champion’.

The Posters created during the activity will be displayed at the upcoming National Energy Forum at a date soon to be announced owing to the fact that it was postponed due to inclement weather.

Held on Thursday November 20th, in the Essequibo Room of the Cara Lodge, a Seminar titled ‘Taking Account of Energy Efficiency in Procurement’ was the next activity. The Seminar was facilitated by Dr. Mahender Sharma, Chief Executive Officer of the GEA. The objective of the seminar was to stimulate dialogue, discuss and bring awareness to benefits of Energy Efficient Procurement and what it entails while highlighting the Procurement Policy statement which states that ‘All public procurement of electrical appliances shall include, as part of the decision-making process, an evaluation of the annual operating energy costs of the various electrical appliances’. Participants were made aware of certain aspects of the Energy policy and encouraged to ensure that the annual operating energy costs of electrical appliances must be included as part of the evaluation in the procurement process.

Though specifically targeting Government Ministries and Agencies the Seminar was also open to the private Sector. Present at the Seminar were representatives from the following Ministries: Tourism, Youth Sports and Culture, Human Services, Agriculture, Foreign Affairs, Amerindian Affairs and Home affairs. Other participants included The Guyana Police Force, the Bank of Guyana, the Cyril Potter College of Education, the Guyana Revenue Authority and GUYSUCO among others.

The Agency also launched an Essay and Art competition during Energy Week. The 1st 2nd and 3rd place winners of both activities will be announced in January 2015 and awarded their prizes. 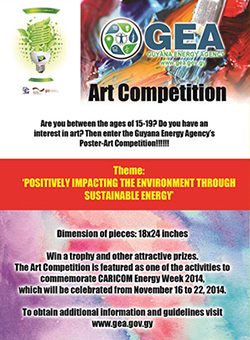 The successful completion of each activity would not have been possible without the support of several organisations. In this regard GEA extends gratitude to the CARICOM Secretariat and the Renewable Energy and Energy Efficiency Technical Assistance Project (REETA), Ministry of Education, Office of Climate Change, Ms.  Petal Jettoo of NCERD and Mr. Ivor Thom of Burrowes School of Art.

The Guyana Energy Agency, in the exercise of its mandate, continues to promote energy efficiency, energy conservation and the development and utilisation of alternative sources of energy. Energy Week, consistent with Guyana’s energy trust and Low Carbon Development Strategy, serves as an annual feature in fulfilling part of the mandate of the GEA by disseminating information essential to improving public awareness on sustainable energy, conservation and overall efficiency.