Hydropower is a renewable energy source based on the natural water cycle. It is the most mature, reliable and cost-effective renewable power generation technology presently commercially viable on a large scale, producing around 16% of the world’s electricity and over 80% of the world’s renewable electricity. Hydropower has four major advantages: it is renewable, it produces negligible amounts of greenhouse gases, it is the least costly way of storing large amounts of energy, and it can easily adjust the amount of electrical energy produced to the amount demanded by consumers. More than 25 countries in the world depend on hydropower for 90% of their electricity supply (99.3 % in Norway), and 12 countries are 100% reliant on this form of renewable energy. 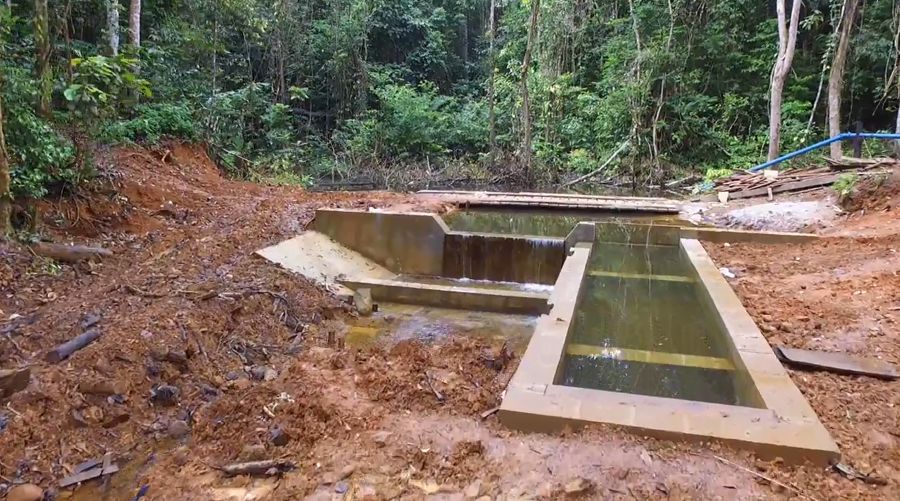 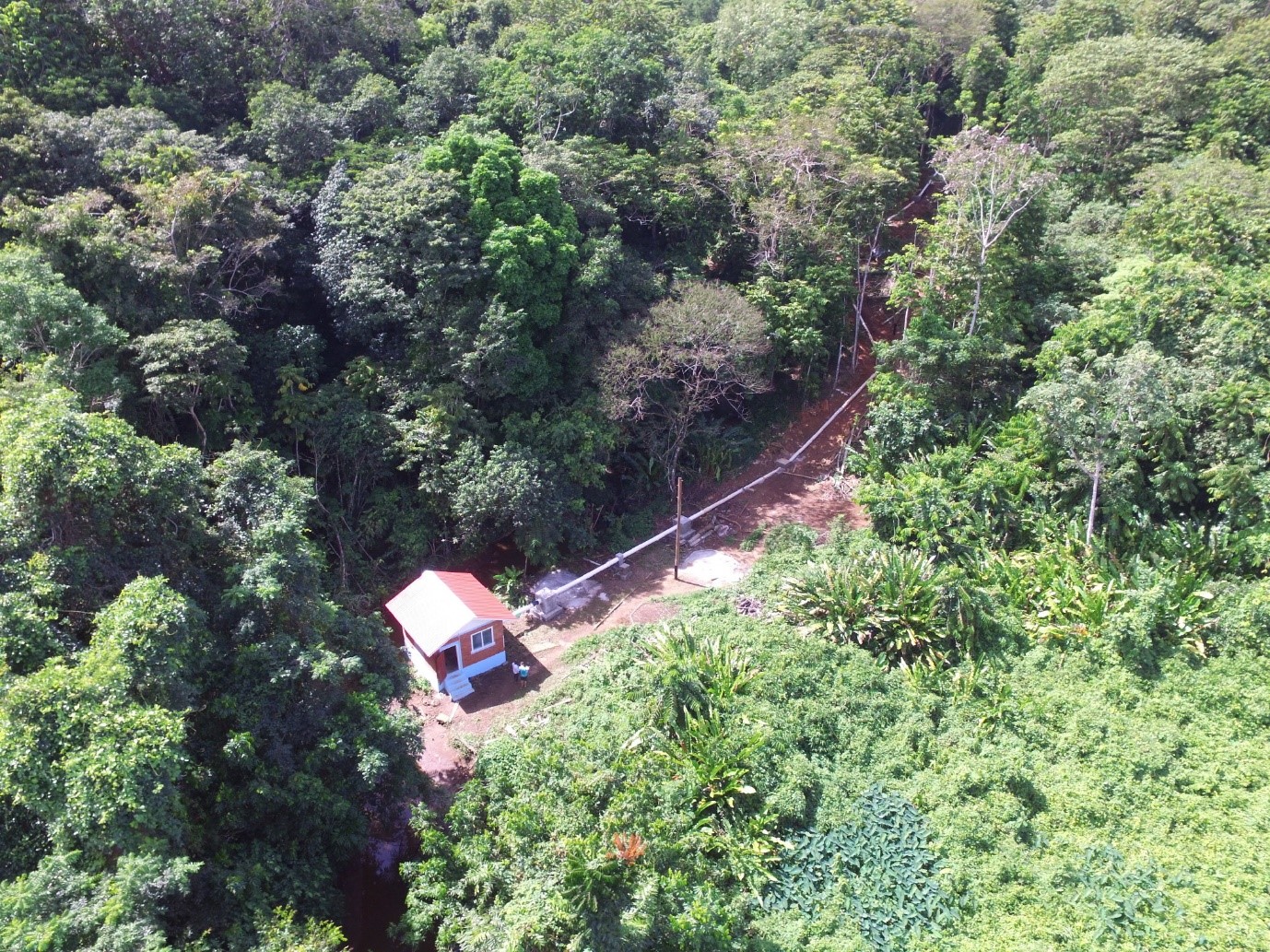 In 2015, the German Government, through its German Agency for International Cooperation (GIZ) initiative, committed to assisting the GEA with the rehabilitation of the Hosororo Hydropower facility in Region 1. The US$165,175 project received US$91,108 in financing from the Government of Guyana and US$74,067 in financing from GIZ/REETA.

The resuscitated hydropower project featured a new design that was conceptualised by GEA’s Engineers and a GIZ consultant (Sven Homscheid).  It entails the installation of a 20kW run-of-the-river type micro hydropower plant, comprising of a Weir/Intake structure, Penstock and Powerhouse. .

The construction of the micro hydropower plant was completed in 2018 and works related to interconnection with the Mabaruma electric grid is ongoing. The plant is expected to be commission in 2019.

The first hydropower station, Tumatumari, utilising water from the Tumatumari Falls on the Potaro River, Region 8, was constructed in 1957 by British Guiana Goldfields Limited and operated until 1959 when mining operations ceased. In 1969, the Government of Guyana re-commissioned the station to serve the Guyana National Service Camps at Tumatumari and Konawaruk. The development included an embankment dam, a concrete overflow dam, and a 2-unit powerhouse with an installed capacity of 1,500 kW using (2 x 750 kW Francis turbines). The now defunct plant is currently being considered for rehabilitation by a private company. 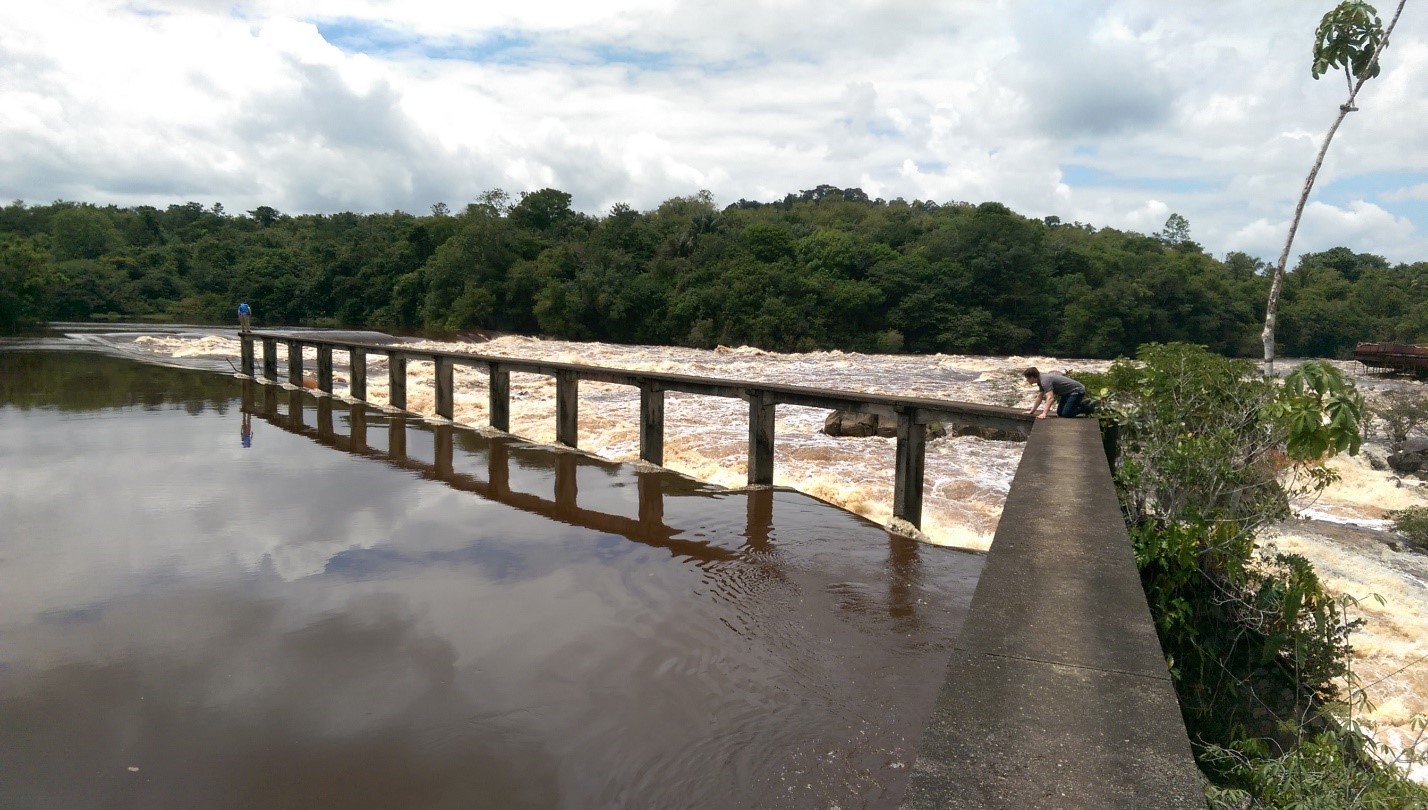 The Moco-Moco 0.5 MW (2 x 0.25 MW) hydropower project, Region 9, was commissioned on November 22, 1999. The hydropower station was designed and built by the Chinese through a joint arrangement between the Governments of Guyana and China. The Moco-Moco hydropower station is a run-of-the-river, diversion-type with a high water head. The Moco-Moco hydropower plant supplied power to the community of Lethem and its environs. Severe rainstorms and subsequent landslide on July 5, 2003 resulted in a fractured penstock. Government has since been actively discussing options for its restoration. Financing is needed for a geotechnical survey to inform the project design and assist in de-risking the project.

The current concept of this project is to rehabilitate the defunct hydropower plant and increase the installed capacity to 0.7 MW. The site is located on the Moco-Moco Creek, which is a part of the Amazon River System originating from the north of Kanuku Ranges converging into the Takutu River.

The project will provide electricity from an indigenous and renewable energy source to serve the demand of Lethem and its environs. This project forms a complementary suite of planned energy initiatives in the town, consisting of a hydropower plant and a solar PV farm.

The proposed Kumu Hydropower Project entails the installation of a 1.5 MW hydropower plant and construction of a transmission line. The Kumu Creek, located in Region 9 (Upper Takutu-Upper Essequibo), is also part of the Amazon River System. The creek originates from the north of Kanuku Ranges converging into Takutu River which is a boundary river between Guyana and Brazil. Kumu site is situated 9.5 km from the Moco-Moco hydropower station. The catchment areas of Kumu and Moco-Moco adjoin each other. The Kumu power station site is located 13 km south-east of the town of Lethem.

The Kumu Hydropower Project will operate as a run-of-the-river type plant with an ultra-high head potential of more than 500 m. Its topographical specifications can accommodate the construction of a small reservoir on the top of the mountain plateau so as to maintain a constant water level for operation of the plant.

The project will provide electricity from an indigenous and renewable energy source to serve the demand of Lethem and its environs. Together with the Moco Moco Hydropower Station, the Kumu hydropower plant can be a strong, reliable and redundant power supplier and controller for existing and future demand. The combined operation of the Kumu and Moco Moco hydropower systems, together with the planned solar PV, can result in 100% of renewable energy generation in the power sector of Lethem.

The proposed Ikuribisi Hydropower Project entails the installation of a 1 MW hydropower plant and construction of a transmission line between the plant and the Bartica Power station.  The site is situated about 45 km south of the town of Bartica in Region 7 (Cuyuni-Mazaruni).

The hydropower system will run as an energy storage hydropower plant with a reservoir, which can serve as a seasonal storage system. The project will provide electricity from an indigenous and renewable energy source to serve the demand of Bartica. Bartica is considered the gateway to the interior locations.

Bartica has been designated Guyana’s first Green Town. The Green Bartica Plan is a Government of Guyana initiative that involves a holistic approach to sustainable economic growth in the township. The main objectives of the plan are to create a climate resilient economy and to establish a green pathway for the foundation of a new Guyana, which will result in reducing the overall carbon footprint in electricity, agriculture, fisheries, water, forestry, waste, manufacturing, transport, construction, tourism and other sectors.

This project forms a complementary suite of energy initiatives to support the Green Bartica Plan. In addition to hydropower, a 1.5 MW solar farm is being developed to displace diesel generators. The hydropower plant will add additional capacity to the grid to meet the town’s growing demand which currently ranges from 2 MW to 3 MW.

The following is a summary of 67 potential hydropower sites in Guyana.

The following is a list of hydropower studies available at the resource centre of the Guyana Energy Agency.

Sites under current consideration are summarized below.

Studies have estimated the potential capacity at Eclipse Falls as 4 MW. All data relating to this site is currently being updated under the Unserved Areas Electrification Program.

Summary Data of the Pre-feasibility Study

The initial estimate of the potential installed capacity for this site was 320 MW, but the study carried out by the developers, Enman Services Ltd., has estimated an average power output of 760 MW with optimization of the dams. An MOU was signed with the developers in 2001.
This project would require the construction of an access road and transmission lines. It is envisaged that power would be available within 6-8 years of construction.

The potential power to be produced is intended for export from Guyana to Brazil and in the future as a Phase 2 project to Trinidad & Tobago.

An MOU was signed in February 2007 with Guyana Goldfields Inc. for a period of two years to conduct a feasibility study. This site has a proposed continuous energy of 62 MW but, is initially intended to supply 35 MW of electricity to its mining site at Aurora.

Government of Guyana and the Guyana Poverty Alleviation Group signed a Memorandum of Understanding in August 2003 to study the Arisaru site. This MOU was for a period of two years which has since expired. This site has a potential of 120 MW.

RUSAL, a Russian Company was granted exclusive rights in February 2007 for an initial period of three years to conduct a pre-feasibility study of this site. This site has a potential installed capacity of 1320MW and the Company is proposing to set up an Aluminum Smelter as the primary load centre.

Based on previous studies, the following key parameters of the Upper Mazaruni Hydropower Station were identified in the RUSAL report.

The Tumatumari Hydropower Station was the first hydropower station to be constructed on the Potaro River, Region 8. The plant was constructed in 1957 by the British Goldfields Limited and operated until 1959 when the mining operations were ceased. In 1969, the Government of Guyana re-commissioned the station where the power was transmitted to serve the Guyana National Service Camps at Tumatumari and Konowaruk. The development included an embankment dam, a concrete overflow dam, and a 2-unit powerhouse with an installed capacity of 1500 kW using (2 X 750 kW Francis turbines).

The Amaila Hydroelectric project is being developed by Synergy Holdings Inc. The Feasibility study and the Environmental Impact Assessment have been completed. The feasibility study was completed in 2001 and then an Interim License was granted in July 2002 for two years and was subsequently renewed until July 2007. The Developer was granted a License to develop the project and is now in the process of securing financing for closure of the project. It is envisaged that this hydroelectric station will be commissioned by 2012. The Amaila hydroelectric station is conceived as a high head diversion scheme run of the river project. The potential installed capacity was initially estimated as 103MW.

Under the Unserved Areas Electrification Programme, the Hinterland Electrification component, Government of Guyana is currently seeking funding to conduct a feasibility study for the Kato site which has a potential of 3 MW.

Below is a map depicting the location of potential hydropower sites in Guyana. 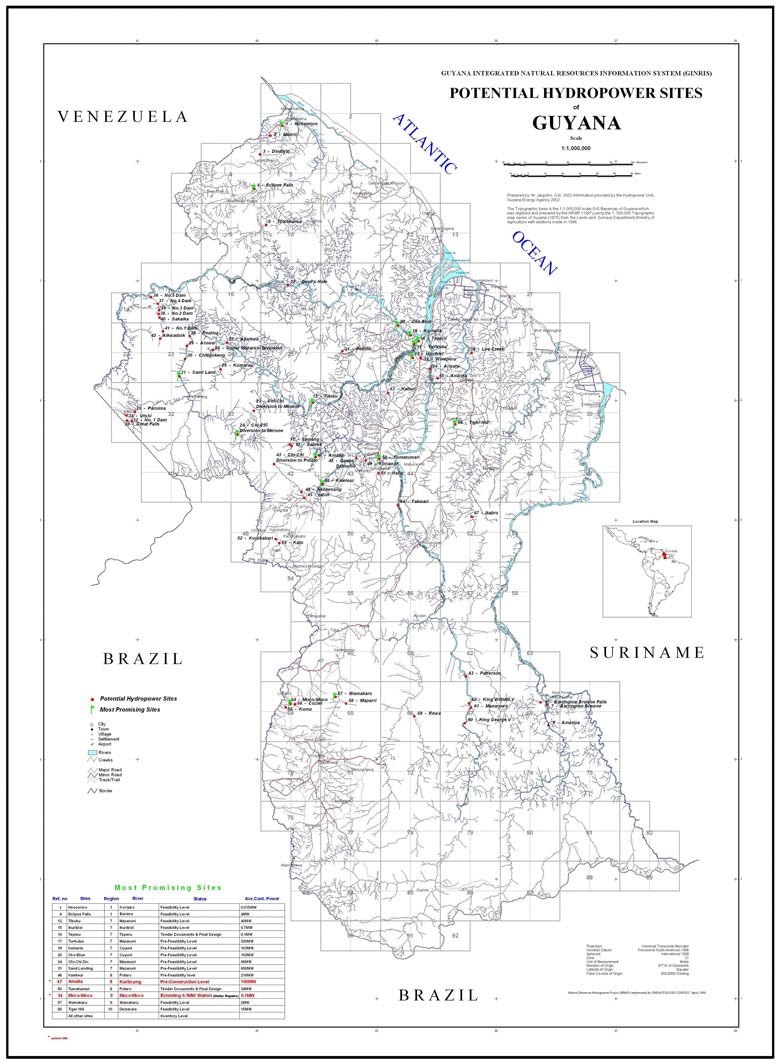