GEA, with support from Deutsche Gesellischaft fur Internationale Zusammenarbelt (GIZ) and the Austrian Development Cooperation, has installed an 8kW Grid-tie Photovoltaic System to:

Guyana receives abundant sunshine which can be used to generate electricity. Photovoltaic systems have a relatively high capital cost but this can be recouped over time, particularly if excess power can be forwarded to the main grid and compensated by a financial arrangement with GPL. The Photovoltaic (PV) pilot project is aimed at demonstrating the feasibility and desirability of Grid-Tie PV technology while contributing to Guyana’s overall effort to promote the use of renewable energy. For this reason, in addition to the PV system itself, a public LED display is used to show the actual state of operation of the PV system. The container shed in close proximity to the office building of the GEA was identified for the demonstration system. All systems have been designed and installed in such way that the risk of theft and vandalism is minimized. All installations were in accordance with the National Electrical Code. 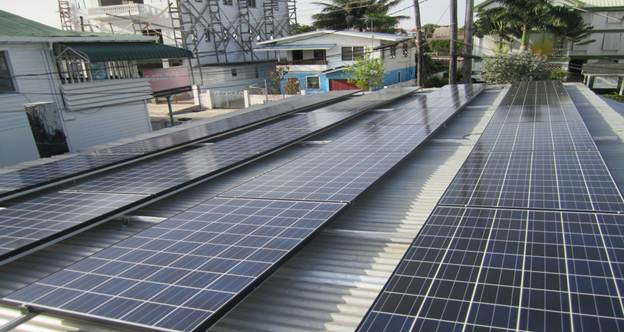 When buying appliances, compare energy labels, not just prices, to make sure you buy an energy efficient unit.