Georgetown, January 2014: Prior to 2003 Guyana was facing a large number of fuel smuggling and associated tax losses. Non-taxed fuel was being smuggled into the country and sold illegally to retail sites while taxed road fuels were being adulterated with low-tax kerosene. With no means of identifying which fuels were legally imported and which were smuggled, and recognizing the ruinous effect of fuel smuggling on legitimate businesses, the Government of Guyana implemented the ‘Fuel Marking Programme’ in 2003.

“Because of poor sales of diesel and gasoline compared to usage, numerous reports of fuel smuggling, coupled with local companies complaining of unfair competition with fuel smugglers it was necessary for some form of intervention to combat these problems…that intervention came in the form of the Fuel Marking Programme” said William Holder, Head of the Fuel Marking Division.

With the technology being new to Guyana and the region at the time of its introduction, there was need for specialised legislation. The Guyana Energy Agency Act 1997 was therefore amended in 2004 to provide specifically for licensing of the different classes of fuel dealers and for the marking of all legitimately imported fuel. Subsidiary legislation in the form of the Petroleum and Petroleum Products Regulations 2004 was also created to regularize fuel operations. The Act was further amended in 2005, and again in 2011, after a review of the system revealed deficiencies.

The Fuel Marking Programme was charged with the responsibility of ensuring that all gasoline, diesel and kerosene were properly ‘marked’ at a known concentration at all legitimate import points and also collecting and testing samples of fuel from various parts of the country including wholesalers, retailers, distributors, transporters, commercial consumers and any person in possession of fuel for the relevant marker(s).

The marking process involves adding a mixture of marker chemicals in liquid form to legally imported fuel before it is released for use or sale. At the time of its implementation, this was done manually. However, the Fuel Marking Programme was bolstered in 2010 with the addition of a mechanised system to add the chemical marker into the ‘bulk storage tanks’. This bulk marking system utilizes self-powered injectors to automatically inject the chemical marker concentrate during discharge of fuel from the international vessels into the bulk storage tanks.

“This system of bulk marking has improved security and integrity by taking the domestic marker out of the hands of the marking staff where ‘losses’ have been experienced in the past…the change from manual to mechanical marking further enhanced the Programme whilst minimizing impact on terminal operations” said Dr Mahender Sharma, CEO of GEA.

In addition to fuel related tax losses and the negative effect on legitimate businesses, illegally smuggled fuel can also affect consumers owing to the fact that usually, the illegal fuel that comes into the country is of a lower quality than the legal one.

“We have found that often the illegal fuel is smuggled in dirty containers and it is exposed to salt water (sea water) which causes it to become contaminated…The use of contaminated fuel damages equipment…contaminated fuel can cause damage to fuel pumps, cause injectors to become blocked, damage fuel filters and spark plugs” said Dr. Sharma.

The issue of fuel adulteration not only covers evasion of taxes on fuel but also encompasses instances where tax free fuel is being utilized for unauthorized purposes. In this regard the program has had tremendous success. Analysis of the laboratory results of samples collected from various sites from 2007 to 2012 revealed that there was a reduction in the number of sites found with adulterated/illegal fuel. 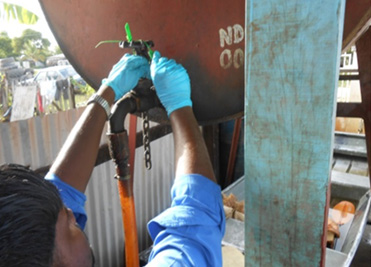 For the years 2007 to 2010, there was a continuous increase in the number of incidents of illegal fuel being found at inspected sites. The numbers however dramatically decreased in the years 2011 and 2012, with 2011 recording a 60% decrease from 2010 and 2012 recording a 38% decrease from 2011. This was despite there being an increase in the number of sites being sampled annually. This consistent reduction of numbers prompted internal investigations after which, due to lack of confidence in their ability to carry out their duty, several employees’ services were terminated in accordance with their contracts. Following this, incidents of illegal fuel detected increased by 169% from 2012 to 2013, again with more sites being sampled than previous years.

The Guyana Energy Agency Act creates various offences for possession of or general dealings with smuggled fuel. Those offences include being in possession of, storing, purchasing, transporting, and selling illegal petroleum. Owing to the fact that legislation of this nature was new to the Region, restrictions in the initial definition of illegal petroleum, the lack of equipment to scientifically determine the type of fuel found to be illegal, among others, hampered the Agency’s ability to successfully prosecute persons found with illegal fuel.
Additionally, in some instances, due to the lengthy investigations, charges filed after the statutory limitation period had expired caused some matters to be struck out. Having addressed such issues, the conviction rate significantly increased in 2012, a year in which fifteen (15) convictions were recorded.

Following the implementation of the Fuel Marking Programme, the conviction rate, representing a total of 26 convictions to date, has dramatically increased and will continue to increase in years to come.  For the year 2013 there were 35 incidents of illegal fuel and 13 prosecutions continuing before the Magistrates’ Courts in Guyana.  Two convictions along with one dismissal were recorded for the year.

The preceding would not have been possible without the partnership and support of other Agencies. In 2007, a Task Force on Fuel Smuggling and Contraband was convened under the auspices of the Ministry of Home Affairs to coordinate the efforts of the different law enforcement agencies in the fight against fuel smuggling and contraband.  The resulting cooperation between the Guyana Police Force, Guyana Revenue Authority, Guyana Defence Force Coast Guard and Customs Anti-Narcotics Unit (CANU) aided in several interdictions of illegal fuel and assistance in capturing, escorting and securing various transport vessels (both land and water). Cooperation from the Guyana Police Force in the detention of suspects and the GDF Coast Guard and Guyana Revenue Authority (GRA) in joint operations have proven invaluable in combating the illegal fuel trade.

The Fuel Marking Programme provides benefits in a number of areas. These include: improved and sustained sales of legitimate diesel and gasoline, improved and sustained collection of excise tax, assurance of fuel quality, direct employment of about fifty (50) persons, confidence in the industry, and in the ability of the regulatory/enforcement Agencies to stamp out illegal activity.

In addition to increased revenue, the record has shown that since 2006 the rate of fuel adulteration detected has substantially dropped each year due to the Fuel Marking Programme. Hence, the constant monitoring and maintenance of the system’s integrity, and by extension the Officers employed under the Programme, is absolutely necessary for its continued success.

"When buying appliances, compare energy labels, not just prices, to make sure you buy an energy efficient unit."