GEA Energy Intervention at Secondary Schools Will Result in over 1.9 Million Dollars in Annual Savings

These initiatives were done in response to findings from an energy assessment conducted at both institutions, where it was identified that significant savings in energy could be achieved through the replacement of inefficient lighting appliances.

At the North Ruimveldt Multilateral School 520 LED tubular lights, rated at 15 watts, and 50 occupancy sensors were installed. The lead Engineer on the project, Mr. Brian Constantine, said that LED lights were chosen because “they are advantageous in that they use 60% less energy than fluorescent lights, do not contain any mercury and are longer lasting.”

This intervention he said “…will save over 22.9 MWh of energy annually and over G$1.54 million in electricity costs with a simple payback period of 1 year. Further, it is anticipated that there will be a reduction of about 13kW in the demand for power at this school where the previous demand for light load was 20.8kW and the new demand now being about 7.8kW.”

Meanwhile, at the St. Joseph’s High School, 146 LED tubular lights rated at 15 watts and 40 occupancy sensors were installed. Mr. Constantine indicated that “…this will incur savings of over 4.4 MWh of energy annually and over G$493,528 in electricity costs with a simple payback period of 1 year.” From measurements conducted it is anticipated that there will be a reduction of about 3.65 kW in the demand for power at this school where the previous demand for light load was 5.84kW and the new demand now being about 2.19kW.

During a follow up visit to the North Ruimveldt Multilateral School, students noted that the occupancy sensors installed in their classrooms were very convenient and the LED bulbs were brighter than the florescent tubes that they replaced. Integrated Science Teacher, Ms. Petal Marks said that “…the occupancy sensors are very convenient and will help with energy conservation and efficiency as, often, students and teachers would leave for the day but the lights would be left on in classrooms; this technology (occupancy sensors) helps us solve the problem.”

An occupancy sensor is a lighting control device that detects occupancy of a space by people and turns the lights on or off automatically, using infrared or ultrasonic technology. Mr. Constantine explained that “…Occupancy sensors are typically used to save energy and money as they deliver lighting on demand.” He further explained that the technology was well suited for schools as “…occupancy sensors help prevent the occurrence of lights being left on in vacant rooms when the presence of motion is not detected and at nights when the school is vacant, given that one of the key observances during the energy assessment was that class room lights were left on day and night.”

While the annual energy savings will be significant at both schools, and thereby the dollar savings through reduced electricity bills, the environment will also benefit as a total of 16,408 kg of CO2 emissions will be avoided annually. 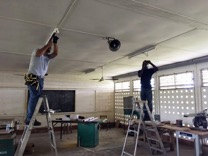 As part of the realisation of the vision to provide reliable energy in an environmentally, socially and sustainable framework, GEA intends to conduct similar exercises at other schools in Guyana. The Agency will also continue to provide technical support in monitoring the use and operation of the systems installed.

Imagine wasting an entire 5 gallon bottle of water every day just by leaving the water running when you brush your teeth! Save Water, Save Energy, Save Money.