Georgetown, September 2017: In May 2016, His Excellency President David Granger announced that the Government of Guyana will lead the way in transitioning towards greater renewable energy use by having every government building convert to utilising alternative sources of energy over the next five years. The Guyana Energy Agency (GEA) was subsequently designated by Cabinet to lead the transitioning efforts and has since been making steady progress in a number of areas.

In 2017, with oversight from GEA, 178.5kWp of new solar photovoltaic (PV) Installations have been completed. (See table below):

Table 1: List of buildings where PV System Installations have been completed.

Dr. Mahender Sharma, CEO of GEA indicated that apart from reduced energy costs and avoidance of greenhouse gas emissions, the installations will raise awareness among stakeholders about the applicability and functionality of renewable energy. He said that “…it is expected to contribute towards Guyana’s efforts to reduce reliance on imported fossil fuels through the proliferation and deployment of Renewable Energy Technologies”. He further highlighted that “…the institutions were chosen from among government buildings that the GEA would have conducted energy assessments of and from regions with ease of access to the national grid.  Priority was also given to Technical Institutions to build capacity within these institutions.

Energy Engineer of GEA Leon DeSouza explained that the majority of the systems will be grid connected “….which means that they will be generating electricity for both internal consumption while the excess energy will be supplied to the national electricity grid…” He further added that “the project will also seek to demonstrate the applicability of photovoltaic system operation and its energy contribution in Guyana”.

According to Dr. Sharma, the solar PV systems installations to be supervised by GEA will total 2.76MW in 2017 alone. Along with the planned 400kWp PV Farm with 400 kWh of energy storage to be installed by HECI, the combined installed solar PV will be an unprecedented 3.152 MWp.

3.152 MWp of new solar PV installations will produce an estimated 4,576,610 kWh of energy annually which will result in over G$269 million dollars in annual savings and result in avoided carbon dioxide emissions of 4,347 tons.

As part of the realisation of the vision to provide reliable energy in an environmentally, socially and sustainable framework, GEA intends to conduct similar exercises at other Public Institutions in Guyana. The Agency will also continue to provide technical support, monitoring and training in the use and operation of the systems.

Table 2: List of 57 Buildings where PV Systems are currently being installed.

Table 3: Additional 18 Buildings based on savings: 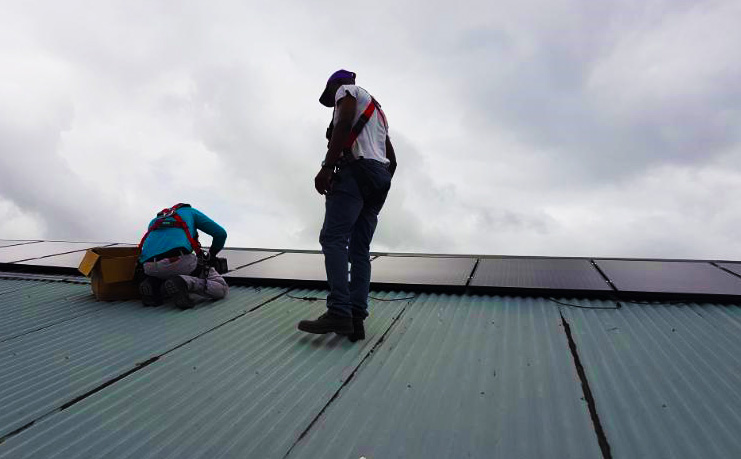